As many of you will know, William has Alzheimer’s. He began showing signs of dementia shortly after finishing writing the Cypress Branches 15 years ago. Since then, his health has deteriorated steadily and he is now cared for in a home in Milton Keynes in the UK.

It has been a struggle for the family to see a man so vibrant and intelligent in life slowly slip away from us.

Browsing through some old photos a few days ago, I found three photos of William with his wife Sheila, each taken 3 years apart covering the last six years. It is both remarkable and heartbreaking to see the difference in each photo.

The first was taken in April 2006 on a holiday in Somerset. 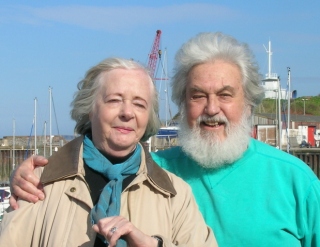 The next was taken three years later, at the launch of the hardback book in July 2009. 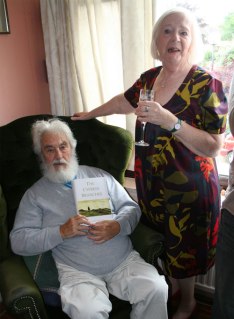 And most recently, this one, taken in March 2012, at the launch of Pegasus Falling. 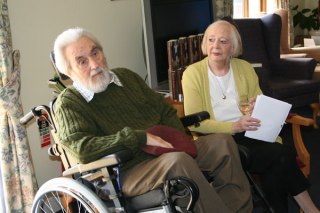 Alzheimer’s is called “the long goodbye” for a reason. I was asked recently during a radio interview whether the family had said goodbye and the question floored me for a second. Although William’s personality and vitality has diminished rapidly in the last six years, there are still glimmers of him that come through. On most occasions, he won’t talk and rarely recognises members of his own family. We’re all prepared for the inevitable. He’s not going to get any better. And we’ve all been saying goodbye for a while now, but it’s so hard to do.

When, all of a sudden, he’ll fix you with a knowing stare and say, “hello mate”, instead of saying goodbye, you want to reach into that mind of his and say hello back, start a conversation, ask him what he’s been up to and share a joke or two. It would be wonderful to be able to claw back the man who wrote such incredible books, and to ask him the many questions I have about them.

Instead, the moment passes all too quickly and the understanding is gone again.